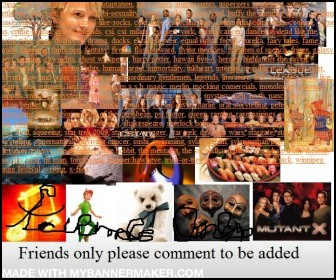 lilphil999
Brush with stardom
Have you ever stumbled across a celebrity in your daily life? Was it more or less exciting than you would have expected? Do you have any interest in meeting media stars?
Reply 496

Ok first off most of these were when I was doing some kind of volunteer work, rather then regular life but I think they count, also most of these people are people who you will have no clue who they are so I laugh.

Twice I did volunteer work at local concerts that Jake Chenia did and he thanked the volunteers and gave us autographs, also the second time we had to work with him about getting child volunteers on stage and stuff. Real nice guy.

I was doing work at a local dog and cat shelter when Ceaser Millian came and did some wk with the dogs. He talked to me about dogs running after cars.

Ace Burpee was the host of the Ultimate Drink Mix competition which a friend and I were finalists in. After the compatition was done we bumped into him and he saw our aprons and said something about good job. I thought it was kinda funny actually.

Chrissy Troy was interviewing people at a Fefe Dobdsin concert and she thanked me when I saved her from a little kids overeager poster flailing. I also got an autograph from Fefe Dobsion who wondered why I was getting someone else's stuff autographed. I bought her CD and got it autographed but my friend asked me to bring I the CD thing that was given out for free by the other artist and get Fefe to sign it for her. So i had to tell Fefe the truth my friend was cheap *grin*

I bumped into Ben Mulrony at the mall during the sign ups for Cannadian Idol, which i had no clue were that day.

I bumped into Cameron Mathison when he was doing the tour with the fusion perfume to department store. He really is a nice guy, despite playing such a creep on tv.

about 10 years ago I was in line at a department store with my mom to buy some clothes and Brenden Fehr was in front of us, I was excited but mom told me to leave him alone.

While I was out walking I have seen many people shooting movies and during the times of filming I have bumped into (thankfully not literally this time) Brad Pitt and Jenifer Lopez. It's nice that they make time for their fans as long as you're not bothering them.

A small request:  All you are asked to do is keep this circulating.

Dear God, I pray for the cure of cancer. Amen

All you are asked to do is keep this circulating.
Even if it's to one more person.
In memory of anyone you know that has been struck down by cancer or is still living with it .

I made this but I'm not a real big coffee drinker, so if you want it snag it but please give me credit if you do I'm kinda proud of it, most of my icons are not that good but I had a good base to work with.

Here are some other ones that I don't think turned out as well all with gif bases.

Heylo people as much as I love having friends and chatting with people, I have learned to be careful so my journal is friends only. If you wanna be my friend just comment and tell me why, I would love to know where you learned about me, why you like me, what we have in common all that good stuff. Then friend me and I shall likey friend you back. Thank you and keep flying.

Open to: All, detailed results viewable to: All. Participants: 6

10) The Drector is always right, even when he is wrong
9) The glitttier and more fantastic and beautiful that it looks the darker and harder the flipside
8) Always streatch both your voice and your body before attempting any sort ofperformance, they are your instrument treat them kindly
7) The world will love or hate you as they will and even though they are the driving fource you cannot let it start to matter
6) You are your own worst critique
\5) You can't go into a performance thining about the audience, or the rehearsals or the scripts because then it becomes a perfomrmance
4) Take as many differnet types of roles as you can, that way you can always keep streatching yourself
3) It's all about the story not about the fame
2) Get used to regection because if you don't you will never be able to get a job
and the number one peice of advice that I have recived is......
*drumroll*